The people of 8 villages namely Shaldigha, Jalalpur, Atkapara, Basaura, Viwpara, Shimulkandi, Khalimapur and Narayandohor in Atpara sub-district of Netrakona vowed to protect birds in their respective areas. The villagers of these 8 villages being organized recently made an oath to protect birds by ensuring friendly and safe habitat for the birds.

It was seen in the past that due to availability of water in Trimohoni in both rainy and winter seasons (The place where three rivers get connected with each) birds were available in those village. But today, there is hardly any bird seen in this place. The people comprises of cultural and social actors having discussed with each other identified that birds hunting, use of chemicals in the crops fields and absence of water in the safe habitat for birds are the main causes for the decline number of birds in the area. 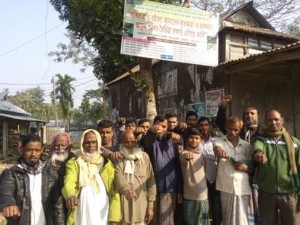 Thus with the objective to protect birds as well as ensure friendly environment for them the villagers of 8 villages formed an 11-members committee and made an oath not to hunt and allow other to hunt birds. The committee members then took initiative to publicize the issues through miking, signboards & leaflet distribution among the people as well as planting local trees.

They also organized different campaigns to create awareness among the people. They did all sorts of these activities with their own fund. The contact numbers of the committee members were written on the signboards so that anyone could contact with them. The committee members also organized dialogues with the local administration and concern persons demanding the punishment of the birds hunters.

The initiatives of the villagers of 8 villages have contributed to stop birds hunting in the area and awareness among the community has increased. Abdul Hamid, one members of the committee thus said, “In order to ensure our survival we need to live with plants, birds, rivers and other natural elements. This has led us to take initiative protecting and loving birds and other natural elements.