‘Farming sector should be dignified to draw the interest of youths in it and the topic of agriculture should be made compulsory in national curriculum’-said the discussants in an online citizen dialogues titled ‘Transforming Food Systems: Youth Innovation for Human and Planetary Health” arranged jointly by BARCIK and Bangladesh Paribesh Andolon (POBA) recently to mark the international youth day.

While depicting the importance of involvement of youths in farming Poba’s general secretary engineer Abdus Shobhan said, ‘In order to attract the attention of youths getting involved in farming the sector should be dignified but we seldom see it as the important and significant one. This leads the farmers not to encourage their kids getting involved in farming or take it as their occupation. The process of dignifying agriculture thus should be started from the family level then comes social and state levels.’ He went on saying, ‘The youth forces should be involved in all processes of food production, processing, marketing and management and the government should make all agriculture materials such as seeds fertilizers, easy available to the farmers. Besides, the farmers should be given loans with minimum interest so that they could invest in this sector properly to make it profitable. Additionally, trainings should be provided to the farmers and initiative should be taken to protect the agriculture produces from getting damaged.  If such initiatives are taken the youths will get interest in farming sectors which will boost not only the food production but also will accelerate the works for ensuring safe foods for all.’ 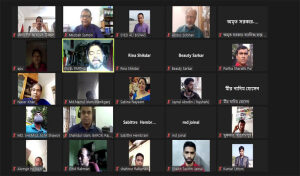 Thanking the participants and discussants for their inputs in the event chairman of Poba Abu Naser Khan said, ‘Initiative needs to be taken to increase the involvement of youths in agriculture. And this will be happened when farming is made as a profitable occupation. In order to make the farming sector profitable, if necessary, government should provide pension scheme for the farmers which will ultimately result in the increase respect of youths to this sector’-he added. Naser Khan said, ‘We should also focus on producing safe foods for all and youths can play vital role in the movement of producing safe foods for all’.

Journalist Shariful Hasan said, ‘The economy of Bangladesh hugely depends on three sectors that include remittance sent by emigrant workers, farming and garments. Of these three sectors farming is a very important one.’ ‘We will not be able to get foods if the farming sector stops producing foods. Bangladesh is a fertile land which helps the farmers producing foods properly that helps us to get food very easily even in the Covid-19 situation’-he added. He went on saying, ‘The price of foods in different countries is skyrocketing day by day while here in Bangladesh we get good food within the reasonable prices. Therefore, we should respect both farmers and farming and if we respect them the youths will be encouraged to get involved in this sector.’

BARCIK’s director Pavel Partha while presenting the keynote paper of the event said, ‘About 59.84% in rural areas and 10.81% people in urban areas have agriculture farms. The state even today considers farming as the main sector of food production and it has adopted ‘Vision-21’ to ensure foods for all. However, farming sector has not only ensured food security of human beings but also the food security of all life forms on this planet. The goal of food policy of Bangladesh is also to ensure foods for all citizens.’ Pavel Partha added, ‘The theme of international youth day during the Covid-19 situation is ‘Transforming Food Systems: Youth Innovation for Human and Planetary Health’. The active and innovative roles of these youths give us a diverse food system which could ensure good health of human beings and other life forms on this planet. It has been found that the active and innovative youths both in rural and urban areas are involved in the conservation and protection of biodiversity, environment and nature through their day to day life and activities. They are also found to fight against social inconsistencies and crimes for making a better world for all. In addition, the youths in rural areas are actively involved in food production while the youths in urban areas are found to take initiatives for ensuring safe and natural foods for all. Therefore, it is a need to connect a joint integration among food producers, buyers, sellers, consumers, researchers, policymakers, scientists and farmers for an overall food system.’

Youth from Rashahi Sheikh Tasnim Jamal said, ‘The youths in Barind Tract of Bangladesh are involved in safe food production and campaign in different ways. They also farm crops in fallow lands and rooftop. But most of the youths are not interested in farming due to absence of recognition in this sector and lack of initiative to ensure fair price of agriculture produces. Thus, farming should be made compulsory in national curriculum.’ 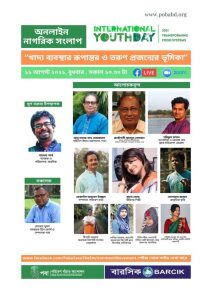 Delowar Jahan, an entrepreneur of natural farming said, ‘Most of the youths want to migrate to towns for searching works. They seldom value the resources they have in their native lands. On the other hand, some youths are found to get involved in farming but they never consider the area specific weather, environment, nature and lands which leads them to be dependent on others for agriculture materials such as seeds and fertilizers. However, the natural farming ensures safe foods for all and is in our own control.’

The participants and discussants in the online citizen dialogues made some demands which are seen below:

It is to mention that the dialogue was presided over by chairman of Poba Abu Naser Khan and moderated by Poba’s Meshab Suman and keynote papers was presented by BARCIK’s director Pavel Partha. Among the discussants who speak in the dialogue include Poba’s general secretary and former managing director of Food department engineer Abus Shobhan, Migration department head of BRAC and journalist Shariful Hasan, film actress Somuna Shoma and youth’s leaders from Netrakona, Manikgonj, Rahshahi and Satkhira. Other youths from different districts of Bangladesh, journalists, development activitists and BARCIK staffs participated in the online dialogues and shared their concerns.