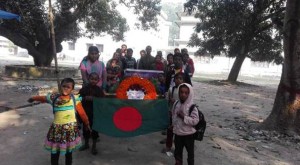 The students of Bengali department of Rajshahi University have a will to something good for the street children. They wanted to arrange meal for the children who almost the time remain starving. In order to make their will into reality some students in 2012 started to sell flowers during the 1st of Falgun, the Bengali month and on the eve of Valentine day as the first day of Falgun and Valetine days are celebrated in festive mode. During the Valentine day they attracted the attention of all by saying “Love the people who mostly need your love”. People being spell bounded by their words bought flowers from them. The students thus accumulated BDT 4000 selling flowers. Based on their decision and will they invited 70 street children and arranged meal for them. Doing this sort of good thing inspire them to do more works that ensure real development of the children as they thought feeding children meal once a day would never make any change and difference in their life. Thus with the aim to do more and help the children growing up with knowledge and skill they felt the importance of an organization by which they could make their dream of doing more good things into reality. Thus they formed ‘ITCHE’ on 12 February, 2012 with the participation of other students in other disciplines.

Why it was named ITCHE?

The activities of ITCHE

The organization implements different activities within their capacity. They provide coaching and teaching for 22 street students at Mirzapur slum. Students of different discipline are involved in teaching those students. The organization also provides books, materials, pens, pencil, copies, register books and other materials for the student so that they could study properly. In addition, the organization also provides the cloths during festival such as Eid, Puja and other festivals. Besides, during the winter season they collected warm cloths and buy some and distributed among the poors.

The members are determined to implement their activities with their own fund. With the objective to collect fund thus they set temporary flowers shops during the different festivals such as 1st day of Falguna, 1st day of Baishakh, Valentine’s day, Chaitra Sangkranti day, victory and independence day as well as during international days and events. They sell those flowers to the people and accumulate cash for running their activities and buying materials for street children education. Besides, each of them provide BDT 20 as monthly fee for the organization and sell books.

The members of the organization dream that they will continue to support the street children to continue their study even in higher level. They are determined to make their dream true. They also dream that seeing their initiatives youth in other parts of Bangladesh also take such initiative to stand beside the humanity that will lead in the emergence of progressive and enriched Bangladesh. The members of the organization have established an example to others that if you have good will you surely find a way to make it happens.