Netrakona is situated in the border belt area of Khasi Hills kingdom of Meghalaya state of India. Many renown and eminent were born in this district contributing to enlighten people and enrich the culture, tradition, agriculture and heritage of the district. Among them include literature laureate Humayun Ahmed, academician Md. Jaforiqbal, poet Nirmolendu Goon, Comrade Moni Singh, Golam Mostofa Jabbar and Prof. Jatindra Sorkar. Farmer Abdur Rahman following the footsteps of those eminent people, within his social status, has been trying to contribute in the advancement of agriculture, culture, society and environment of Netrakona district. He might not be eminent as them but his determination, sincere efforts, curiosity to know made him unique among the others. His initiatives have benefited people, guided and encouraged them. He contributes to enlighten the people of the area with the light of education through the establishment of Library. Md. Alamgir and Shangkor Mrong prepared this article based on the life tale of Abdur Rahman. 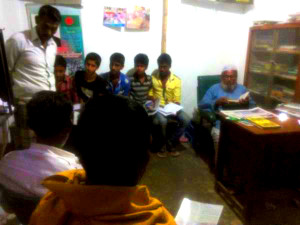 The early life and the struggle

Mr. Rahman was born in 1943. His father Md. Sheikh Hasem Ali was a railway staff and his mother Momjan was a housewife. Abdur Rahman is the eldest among two brothers and a sister. When his father departed in 1951, Mr. Rahman being only a 9 years old kid had to take huge responsibility to feed the family members. However, with the help of his mom he farmed vegetable in the lands that his father left for them to run the family. Later on, in 1966 with the assistance of his father’s colleagues he joined in the railway department. He resumed farming vegetable after the office hour in spite of having the job as the farming supported him to maintain family expenses. His curiosity to learn and study did not fade in spite of the struggle he had to undergo in his early age. Thus he collected different books and went through them. Seeing his curiosity to study, one of the railway high officials helped him to get admitted in night school. His study thus resumed and every day after the duty he went to public library to study crossing 6 kilometers path on foot. But his study stopped during the liberation war of Bangladesh. He could not continue his study after Bangladesh got independence. He concentrated on his job and farming after the liberation war. He got two friends who accompanied him to earn knowledge and they together brought out wall magazine to encourage others to education. In course of time all his friends left the area for higher education and since that time book became the closest friend of him. Abdur Rahman was not only an honest and sincere railway staff but also a leader of the laborers. His sincere behavior, skill and leadership quality made him popular among the others. Mr. Rahman got married to Jahera Akter in 1971. He has 5 kids who are now established in their own field of works.

As mentioned before, Mr. Rahman was books lover. He loves to collect and read books whenever he gets times. He had a strong will to establish a library where everyone could come and study. At last it was in 2013 when his dream was fulfilled as he established a library which a named “Mass development Library” in a room of Shapla Kindergarten located in Challisha bazar of Netrakona. The objective of establishing the library is to enable the people in his village developing habit to read books and exchange of ideas and knowledge with each other as well as to discuss about the problems and opportunity of the areas together and get the solutions of the problems. Besides, he wants to contribute in the enrichment of the culture, traditions and other aspects of the areas by establishing the library.

Members of and books in the library

According to the register book, presently 81 people have become the active members of the library. Including the active members people of different walks are also members of the library who visit the library now and then and collect books for reading. Mr. Rahman got the inspiration from different people that include: writer Dr. Lutfur Rahman, novelist and writer Emdad Hossein Khan, poet Nimolendu Goon to establish such library he mentioned. Mr. Rahman is grateful to BARCIK due to the support and inspiration he got from the organization. In order to make his dream into reality, BARCIK provided Mr. Rahman 150 of different books. In addition, Mr Emdad Hossein and Mr. Subash Ranjan Dutt gave Mr. Rahman each copy of their published books. Mr. Rahman and his sons also try to collect books now and then to enrich the stock of the library.

So far, many government officials, renowned writers, poets and people visited the library. Among them include high official of Agriculture Policy Support Union (APSU) of Agriculture Ministry, renowned Poet Nirmolendu Goon and MISEROER representative. The success of Mr. Rahman establishing the library has inspired the two villages of the same Union to establish “Abdul Hamid Khan Memorial Library’ and Mr. Rahman provided cooperation to them so that they could do it properly.

Role of the library in conflict resolving

The establishment of the library does not only give space for knowledge gathering but also a place to resolve conflict among villagers! Before the library came into being there was conflict among the people of two villages namely Challisha and Rajendrapur due to some silly reasons. However, in 2013, news was spread regarding the inauguration of the newly established library and people of the two villages were invited to attend the very occasion. Being invited, including other people from other villages the people of the conflicted villages also participated and named the library as “Mass development library”. Their participation in the inauguration and naming led them to forget all the previous conflicts and since then they stay side by side in any sort of development initiative in the areas. Being able to resolve the conflict Mr. Rahman proudly said, “I will continue to work until my death and make the library one of the bests in Bangladesh. I hope people of my village are now ready to take the responsibility to run this library in my absence. This library will not only be store of knowledge but a way to refresh our social ties and cohesion.” He went on saying, “This library will be a bridge between the new generation and senior citizens. The senior citizens will share their knowledge and experience with the generation and the new generation will extend their helping hand to get the senior citizens their deserved respect and facilities. This way, good relation will be developed and progressive society will be developed.”

The contribution of Mr. Rahman in education

Mr. Rahman is a scholar. Thinking about the importance of education he established a school in the market. He established the school in 2003 and named it “Shapla Bidya Niketon”. His eldest son and daughter in-law take care of the school. Presently, about 150 students study in this school starting from nursery class to standard five. Mr. Rahman also tries to get himself involved in agriculture, culture and social welfare works and advises the young generation to choose the right path for being able to contribute in overall development of the society and state.

Mr. Rahman does not only work in spreading education and transferring knowledge but also inspires others to love the nature. He himself plants lots of trees in his yard and farm diverse vegetable in his lands. According to him, “We need to protect the environment for our survivability. That is how I conserve biodiversity and encourage others to do so”. He planted about 150 different fruit trees such as mango, jackfruit, olive, betel nut, horitoki and so on taking lease of the railway lands. He shared the fruits with other people as well.

The dream of Mr. Rahman

Mr. Rahman reads books and play games with his grandsons and daughters in his leisure time. According to him, people need to keep pace with the changed situation and times to progress in life. He said, “I kept pace with the changed situation and realized the importance to be smart in course of times. This led me to harvest success in life. People now get inspiration seeing my success.” He dreams about an enlightened society where everyone does their duties properly and contributes in all sorts of development initiatives that gear towards bringing prosperity and stability in the society and state. He said, “With the grace of Almighty I am now fine and economically solvent. I am the common grandfather of all as everyone calls me their grandfather. I enjoy that very much and this also inspires me to work for the welfare of the people until my death.”