Dilip Tarafder, a farmer from Chandipur village of Shymanagar under Satkhira district located in most climate vulnerable coastal belt, recently was given ‘Independent award’ by the Shymanagar Upazill administration for his contribution in agriculture sector of thr area. He received a crest on 26 March, 2016 as the symbol of the award.

The coastal belt of Bangladesh is a salinity affected area due to its geographical location. And the nature and human created disasters have intensified the level of salinity in the area to some extent. Thus it is a burning need to develop and supply saline tolerant crop varieties to farmers in the area so that they could cope with the changed situation. From this backdrop, Mr. Tarafder has been making self effort to develop saline tolerant rice varieties since 2010 with the objective to make the availability of area specific and saline tolerant rice varieties for the farmers. As part of his effort, he experimentally farmed saline tolerant the advance Khejurchari and good yielded Kutepatnai varieties. After intensively observing the characteristics and traits of those two varieties he crossed the two varieties and invented the fifth generation Charulota which the farmers of the area farm in their fields during the aman season. 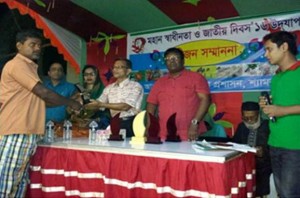 In addition, Mr. Tarafder has been contributing to conserve and protect the agriculture ecosystem and agro-biodiversity through his ecosystem based agriculture practices. He plants mango, jack fruit, guava, coconut, jam, papaya, sobeda, palm and other fruits and medicinal trees in his homestead. There are 65 types of different fruit, wooden and medicinal plants in his homestead which encourage others. Mr. Tarafder also played important role to ensure safe drinking water for the people of 10/12 villages through initiating good management of the Mithapukur pond. His initiative and will to play role in ensuring wellbeing of the people has led him to be recognized by the upazilla administration and other organizations. Mr. Tarafder having received the award said,  „This award does not belong to me alone, it’s the recognition of the initiative of the farmers in the coastal area. This award will surely encourage those farmers to contribute for the flourish of the agriculture in this area.”