Satkhira is situated near Sundarban in southern coastal region of Bangladesh. The area is known for its frequent natural disaster, salinity, waterlogging, flood and cyclone. It is also known for the hard work of the people to uphold their existence coping with changed climate. However, in order to provide safe place for the people in the coastal region during the disasters the government builds some ‘shelter homes’ which are known as ‘Cyclone Centers’. These cyclone centers are used for dual purpose. During disaster these shelters are used for shelter home and when there is no disaster these centers are used for running primary daily curriculum of the existing schools in the region. 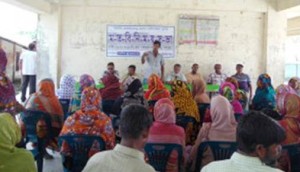 However, when the government built the centers it did not consider separate spaces, rooms, toilets for women, children, physically disabled people and senior citizens. Besides, it also did not consider safe rooms for the livestock of those people who come here for shelter during the disasters. When climate induced disaster occurs, people do not come alone but with their livestock and movable properties. Thus due to lack of these facilities in the shelter centers, women, children, senior citizens and disabled people face immense problems. The shelter centers when used as school buildings are not friendly for running school and for the students as well. Due to lack of separate rooms and facilities people face problems living in crowding environment with male, female, children, senior citizen and physically challenge people in one room.

Women also face problem during their menstruation as they do not have the both the facilities and privacy to change and clean their napkins and pads. Even they have wash there cloth in saline water, which is risky for their personal health and hygiene. Besides, there is no extra arrangement for pregnant women as well in the center. So it creates health risk for pregnant mother or infant with mother. There is no option for dress change or dry. They use wet cloths. leading them to face health hazards.

To this end, BARCIK in association with local people arranged a dialogue and discussion with local government and govt. officer associated with cyclone center with the objective to raise the issues and problems of people in the cyclone centers. It is through this dialogue that leads the concerned authority to assure and ensure people that they will take initiative to provide women, children, senior citizen and physically challenged people friendly cyclone shelters or schools when such new cyclone center and schools are built considering the harsh situation they face.