The Padma river and its branch Ichamati, flowed through the Harirampur sub-district of Manikgonj.  Besides, Diabari beels, Bhatchalah beels, Gopinathpur beels are filled with water in the monsoon season. Being a low area adjacent to the Padma river, farmers spend their lives fighting with nature, keeping in mind the natural disaster, such as floods, over-rains, river erosion, floods and dense fog. Due to irregular rainfall, temperature, natural disasters, and its consequences are increasing. The impact of constant change and misery on farming is the highest on rural poor. Farmer Nasima Begum (46), of Vellabad village under Harukandi union of Harirampur upazila, told about alternative arrangements in disaster situations, “We are living in agricultural work.” 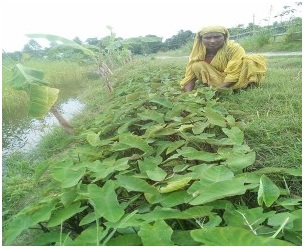 She also said, “edible roots plants will die due to flood water in Palan (in the crop fields). For this reason, I have put edible roots plant on the high side of the road. After monsoon released water from the ground, then it is planted in the field. I just prepare the land with dung manure and in the cultivation of edible root farming, they grow up.” She went on saying, “Loti and leaves are found in edible root cultivation, which can be sold from the month of Joistha to Shravon. One kilogram of loti can be sold at Tk 30-40. There are an estimated two kilograms of loti and leaves could be received in one edible root tree. An edible root plant can be sold for 30-50 taka with root. Edible root is quite profitable and during the flood, everyone cooks curry in our area. ”

In order to reduce the disaster risk we need to create public awareness through preparing for pre-crisis disaster preparedness through village level discussions. The participants identified and shared the risks of the village (flood, extreme rainfall) in the  discussion. As the rainy season is full of water all over the ground, the farmers of the field keep planting edible root vegetable on the roadside for preserving seed diversity.  When the water comes down from the field, Farmers tested the amount of silt and sand in the fields and cultivated them.

In the past year, it was possible to cultivate paddy in the Aman season. But now in Aman season cultivating Bona Aman is not possible due to excessive water on the land. Besides, farmers took an initiative to cultivate Robi grains in comparison to the comparatively high amount of sand in the field. Shahidur Vishwas (45) of Baharchar, Ramkrishnapur said, “Farmers have experimented with farming at the level of experience. According to the type of soil, the cultivation of coriander, red spinach, spinach, sweet pumpkin, gourd, mung beans, black gram, grass pea, onion, garlic, sugarcane etc. are cultivated after the flood water has fallen down. Fields are full of diverse crops.

The hard work of the poor farmers are filled with grains of farming into farmers’ houses and the country is full of food grains. Farmers are successful in farming with their skills and environment-friendly farming. We have been living for decades through environmental activation practices.