Climate change is an ongoing natural process. In this process, our planet Earth has already passed the warm and ice age and now it is passing through the third phase. There was consistency in this ongoing process. But after the eighteenth century, global warming took place due to the excessive industrialization and consumption and luxurious attitude of the developed world and modernization of so-called agriculture which continues to adversely affect our climate. One study found that in 1800, the world’s average temperature was 13 degrees and in 1917 it reached 14 degrees. Due to the increased temperature, this effect is affecting rainfall, public health, diversity, life and livelihood, and the overall system of the world. 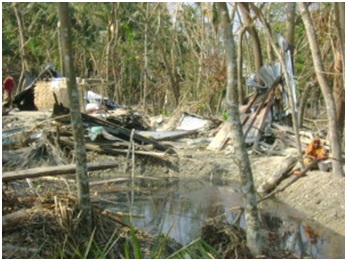 ‘Loss and Damage’ is the last step of any disaster caused by climate change. There is no alternative way to adapt to the change for poor countries like us as well as to survive the negative impact of climate change. But when the disorder is not tackled by the adaptation method, losses and damages are seen more and more and only then the issue of compensation comes out in front of everyone. Due to climate change, disasters can cause serious harm to humans and other animals, economic, social, and cultural resources, infrastructure and livelihood. These fatalities are called ‘loss and damage’.

Though it is difficult to define an effective definition of loss and damage. Yet from the international stage, it is being tried to define the Loss and Damage of climate change. However, according to the definition, damage is the situation caused by a disaster and the damage can be overcome after few months and years such as woodland damage, crop damage, and house losses are called damage. But a loss is the result of the disaster which can never be fulfilled or overcome. For example,  the death of humans and other animals.

The effects of climate change on earth are influenced in different ways. One of them is “Extreme Weather Events” and the other is “Slow onset events” and both events are closely related to each other. The extreme weather events are drought, floods, tropical cyclones, bores, heatwaves etc. These events occur anytime, as it is called weather events. For example, the cyclone Aila, Sidr, Mahasen, the sudden flood of haor and sudden floods in the northern area and mountain collapses disasters including Rangamati and other areas are called Extreme Weather Events.

The events of Slow onset events are- Desertification, diversity of life losses, loss of soil fertility and deforestation,  glacier displacement and erosion, increased sodium acidity, the elevation of the sea surface layer, salinity, increase the warmth of air masses etc. These are gradually occurring due to climate change. For example: increased salinity of the coastal areas of Bangladesh, increased the height of the surface layer, desertification started in Barind area, etc., is known as the events caused by climate slow down.

Local and national level discussions have started with ‘Loss and Damage’ from the very beginning. Climate change impact has caused loss of 192 billion dollars every year due to climate change-induced disasters. After the Sidr, Bangladesh offered to negotiate internationally for compensation of losses and damages in 2007, but no discussion or decision has been taken regarding that. Thus there is no clear guideline in the process of ‘loss and damage’. On the other hand, small island states who are losing mainland due to natural disasters and due to rise in sea level height applied to the International Insurance Pool in 1991 to get compensation for their losses and damages.

Due to climate change, the only economic damage is calculated, but there are many types of damage outside of economic losses. It is not possible to recover such compensation as there is no system to calculate the losses of public health, movement problems, cultural heritage and indigenous knowledge and skills and diversion of harm. Due to Bangladesh being the victim of major exposure to climate change, Bangladesh has proposed to the developed countries to compensate for losses and damages in Cop-11 (COP-11) by attracting the attention of the world. Following this recommendation, an action plan was created to provide compensation for ‘loss and damage’.

An Executive Committee was formed to compensate the Cop-19 ‘Loss and Damage’ held in Warsaw, Poland, whose work was to find out a guideline to accommodate the damage. This issue is now in a good position in the international negotiation and it is hoped to be successful in getting compensation from the next Cop-24 held in Berlin.

Climate Scientists’ opined that due to global warming if the Greenland ice melts, the height of the sea-level in Bangladesh will rise by three meters, many of the coastal districts of Bangladesh will sink. Thus dealing with climate risk is the common name of the daily struggle for the people of Bangladesh. Along with adaptation, reducing risk caused by climate change is the one way of exchange the risk for other parties. In order to exchange this risk, it is necessary to create a law framework, enforce a contract, insurance or other social security programs through which this risk can be reduced.

It is possible to exchange this risk by making personal life insurance, crop insurance, and livestock insurance. It is a way of executing the compensation from the developed country. It can be implemented through a legal framework that combines this insurance cost with internationally available green climate fund.

If this insurance is implemented, the disaster risk can be obtained from the adverse effects of the climate due to the deterioration of climate, the island nation and climate poor people of poor countries receive some justice. To recover this compensation, it is necessary to start awareness from the local level. So, the words of the people affected by natural resources can be reached to the law enforcers. And our lawmakers can bring in compensation by negotiating this issue internationally.