There is such proverb like many a little makes a mickle or many drops make a light work. We are talking each other like that in our everyday life. Similarly, ten people from Lengura and Chaitanagar villages is taken an initiative to build a bridge with wood on the Ganeshwari river.

In Lengura the community people used to cross Ganeshwari river by boat every year. The bamboo `chattay’ was made to make passengers conveniently walk when the river water decreased. They noticed that in many cases, the passengers faced difficulties by crossing the river by boat, especially the students and the elderly. These ten people often talked with each other about how to solve this problem. Then they took an initiative to build a wooden bridge on the river. They started by collecting funds and begin to make the bridge of wood. 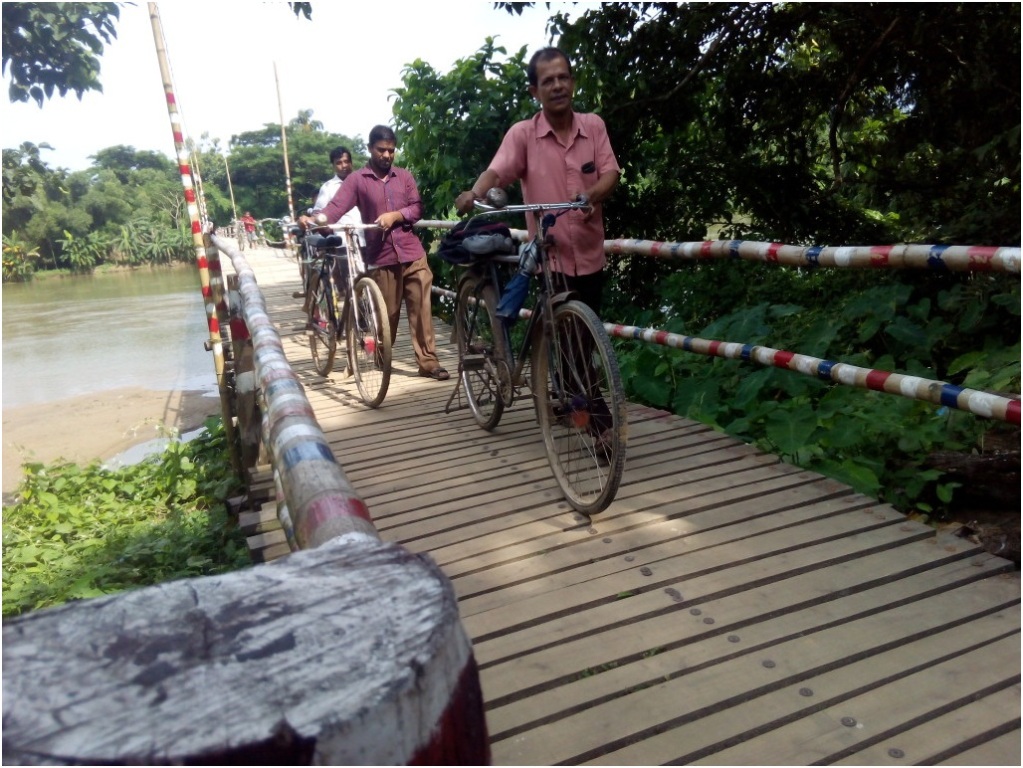 Finally, by spending around BDT 5,50,000 a 450 feet long wooden bridge was built on the Ganeshwari river. Many suspected it might not be sustained due to mountain wave. But no, there was no problem of the mountain wave. The wooden bridge is still standing by passing through the entire monsoon. I was talking about the bridge built on the Ganeshwari river of Langura Union of Kalamakanda Upazila.

The inhabitants of Langura, Kharnaai and Rangchati union regularly travel along this route for various tasks. If there is rain, water comes from the hills directly, so that rivers are filled with water. When the rain was stopped, the river’s water gradually decreases. At that time, there was a problem to cross the river by boat. The knees went down into the water. Many times the boat sunk. 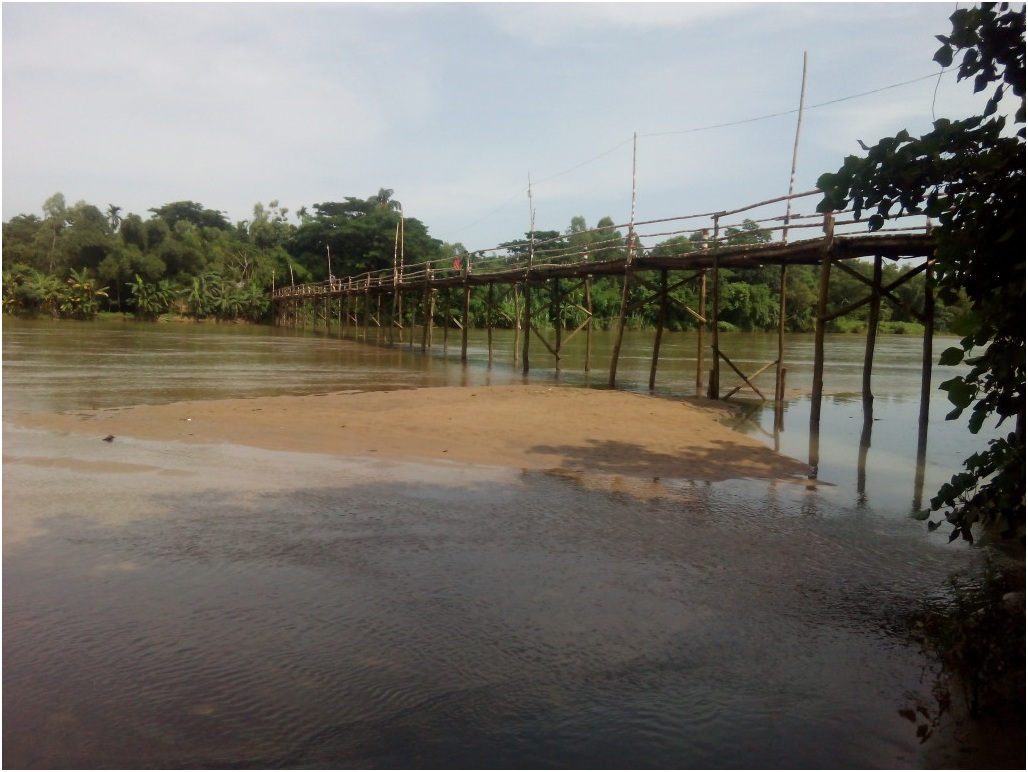 But now people are not suffering from those problems. Every day, almost thousand people are traveling by this wooden bridge. Besides, 5 hundred students of school and college everyday  travel with ease. No rent is taken from older persons, teachers and students when the use the wooden bridge the cross the river. In this context, headmaster of Ghoragao Primary School said, “It has been very good for us as the bridge is in place. Because in past I cross the river by boat and sometimes due to the trouble of crossing I could not reach the school on time. I have to park my bicycle one side of the river and walk about 2 kilometers after crossing the river. Now, I can reach the school on time with the bike.”

Kanchan Mia of Chaitangor village said, “We have seen that many times plan was formulated for making the bridge in this river but no implementation was done. So e did not look forward to the government, we thought of making the bridge by own.”  Tamlika, a 9th-grade student of Langura High School, said, “When the river went through the boat, the clothes were wet get scared of getting sunk, but now there is no longer the problem.” 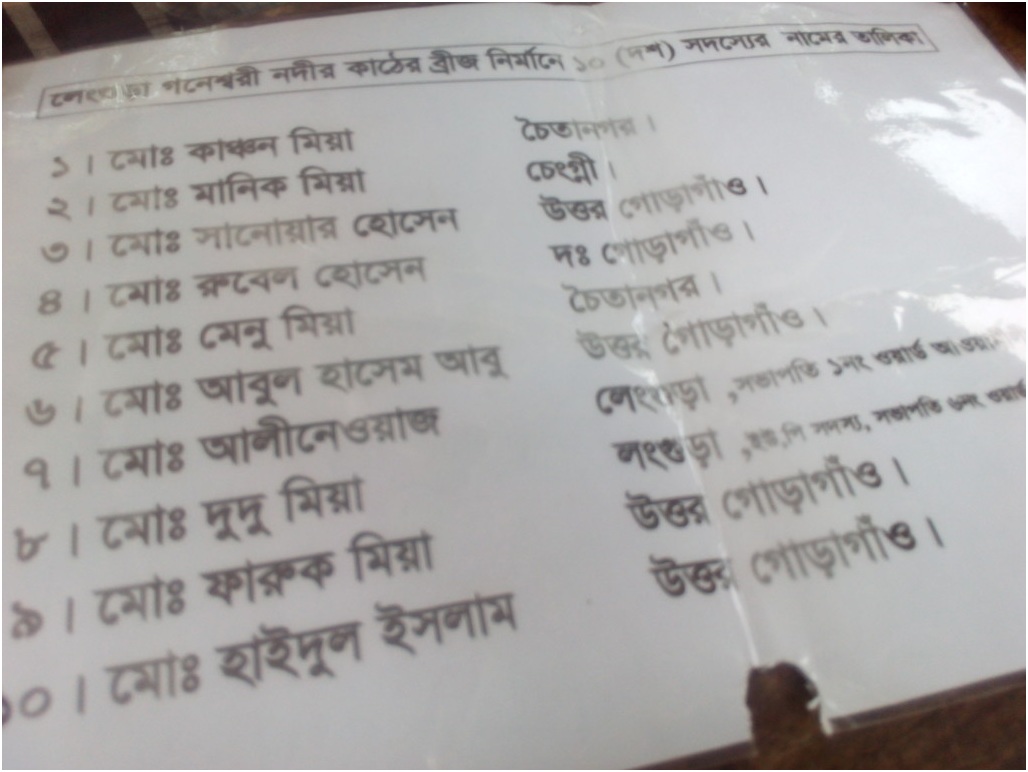 Md. Siddik, a motorbike driver of Govindpur said, “earlier when we went to Durgapur, we had to go through Kalamakanda because we have to cross the Ganeshari river by boat, it took a long time, and many times the boat could not be found. Now we can move smoothly.”

The general population of the Langura village again proved that they have to work themselves to solve their own problems. As a result of this initiative, people of three unions are now able to move very easily. Such initiatives have to be praised by everyone.