In Bangladesh, the coastal region is the most vulnerable to natural disasters. In recent time, Shyamnagar Upazila of Satkhira district is known as a consequence of climate change and natural disasters affected area in the world.

The natural disaster like flood, tidal surge, cyclone and river erosion are the constant companions of this Upazila. Also, saltwater disaster is constantly creating a terrible situation in 12 unions of the upazila. There are two types of consequences of climate change in the southern coastal region; on hand natural disasters are increasing and other is the result of low rainfall groundwater level decreasing gradually. Saltwater water aggression is also increasing in agricultural land. 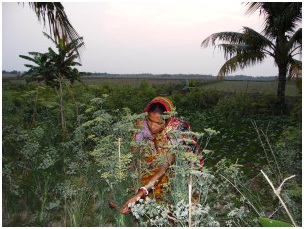 Natural disasters strike the coast one after another frequently. Due to river erosion, the cultivable land gets reduced every year.  For this reason, agriculture and farmers are being more affected due to disaster. And in the same way, the people of the coast are facing severe threats. By facing these natural calamities, rural women in the coastal region continue to struggle for survival.

Mafiza and Ambia Begum of Pakhimara village of Padmapukur union said, “Because of the salt-water shrimp cultivation, there is no agricultural land, we only cultivate vegetables at our homestead land all year round. By excavating the pond we keep the rainwater and cultivated vegetables in high places. ” They also said, “During the monsoon, we cultivate 10 types of vegetables including ladies finger, dhundall, Poo spinach, bean, gourd, red spinach, spinach, edible root, pumpkin and bottle gourd. With the end of the monsoon season, we started planting vegetables for the winter season. The reason is that when the water of soil goes away, it is not possible to plant crops.”

Koushlay Munda and Ruhit Das highlighting the picture of their long agrarian struggle of the Burigolini Ashrayan project (Barrack) narrated, “expert and experienced farmer delegation examine the soil and water of the barracks and for each family of the barracks to make the soil suitable for the cultivation. Then they recommend putting 3 to 4 granary dung to prepare the soil, to repair PSF (Pond Sand Filter) for irrigating the agricultural work from the pond water and make a fence to protect cattle from entering in the agricultural field. BARCIK assists in resolving the problems on their suggestions. Then the farmers distributed their preserved seeds of ladies finger, kidney bean, sweet pumpkin, vegetable gourd, poo spinach, papaya, spinach and cucumber”

Farmers Sirajul Islam, Niranjan Joardar and Farida Parvin said, “Barrack soil can be suitable for agriculture even if it is a bit saline affected. With organic fertilizer and regular irrigation and rainwater in the one to 2 years, it is possible to cultivate a lot of vegetables throughout the year.” In the first stage vegetables, seeds were not germinated of due to soil salinity. But in the continuous efforts, the people have been able to produce poo spinach, gourd, vegetable gourd, sweet pumpkin, cucumber, spinach, edible root, ladies finger, bottle gourd, peas, bitter gourd and kidney beans in adjacent agricultural lands of their homestead. The barrack population said that the crop is now being harvested on their soil. All kinds of seedlings of the rainy season have come out. They all are now able to produce vegetables to eat. By selling some vegetable they can buy a few necessary goods as well.

Shakhina Begum of Chakbara village of Gabura Union said, “After the Aila, by excavating the pond, after planting the soil, we started cultivating vegetables by raising the soil in a particular place. I have cultivated 10 kinds of vegetables including ladies finger, dhundal, Poo spinach, gourds, red spinach, spinach, edible root, pumpkin and bottle gourd.” The successful vegetable cultivator of the barghalini barracks (capable of making saline soil to suitable for the cultivation) said, “I have fixed the soil up to the cultivation of vegetables after seeing the vegetable cultivation of Shakhina Begum. Gabura’s soil is more than that. That is why it is better to make the soil little higher for farming vegetables.” The farmers will be benefited if they get support to make the vegetable shelf. They can also exchange vegetable seeds like the barrack. They will be successful in fulfilling their own family’s needs. 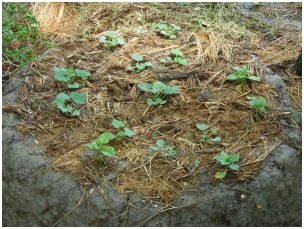 Bangladesh is densely populated; the amount of agricultural land is less than the population. Because of the significant portion of the land is being affected by salinity, agriculture is facing a disaster. Quick steps need to be taken to tackle the problem. The initiative also needs to be taken to find out how to protect the southern part of the country from salinity. It is important to cooperate with the implementation of the development plan of the local people in the reconstruction of the local agricultural diversity-based livelihood of the coastal south-west of Bangladesh in the face of natural disasters such as Sidar, Aila, Salinity and Drought, which are negatively impacted by climate change.