A patshala (education center) which means school named Padma Parer is situated in the char area of Horirampur, in Manikgonj. This shcool has become an inspiration for the guardians of children in the remote area. The poor and deprived children get the opportunity to study due to the presence of this school in the char remote area. The teachers of this school coach the children without taking any honorarium. They do not only teach the lessons of textbooks but also morality and humanitarian education to build the students as good citizens. The youths who have been working as volunteers for BARCIK build this school for the poor students, especially Meer Nadeem Hossein. The students do not need to pay tuition fee to get admission in this school. The youths take the responsibility to teach the students in the morning and evening. Meer Nadeem Hossein said, ‘While working for BARCIK as volunteer we learn that we have some responsibility for our family and society. Thus, from that sense of responsibility we build this school for the poor and deprived students whose guardians do not afford to send them to formal schools.’ ‘Now working for the welfare of others has become our addiction. We want do something for our society and make our society a developed one’ he added. 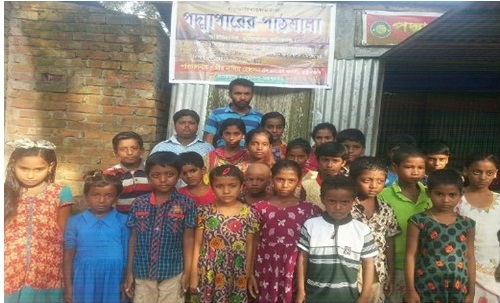 Meer Nadeem Hossein mentioned that Padma Kishore club, a club run by the youths, has allotted them a room to run the school. Now about 40 poor and deprived students study in this school. The teachers always take the lessons carefully. President of Padma Kishore club Jahidul Islam Tutul said, ‘We dream that someday these students will do the same works when they are grown up being highly educated. Padma Kishore club, to motivate and encourage the children, has been arranging essay and sports competition every year.’ ‘We appreciate the initiative of the youth to teach students with free of cost and thus we allotted them rooms so that they can do their business’ he added. Teacher Mirajul Islam (Shimul) said, ‘We want the children in the char area to study and enlighten their family and society. The government has taken various initiative to give the light of education to all but in some cases the people in remote area, particularly char area cannot avail the opportunity. Thus, being motivated and inspired by BARCIK we have taken the initiative to shed the light of education to those poor and deprived children.’ We found it interesting and dutiful work when we teach the children. Our initiative has drawn the attention of others and has earned appreciation of the seniors. We target that no one from Boira union of Horirampur will remain illiterate in the future. We will continue our works to spread the education to all’ he added. 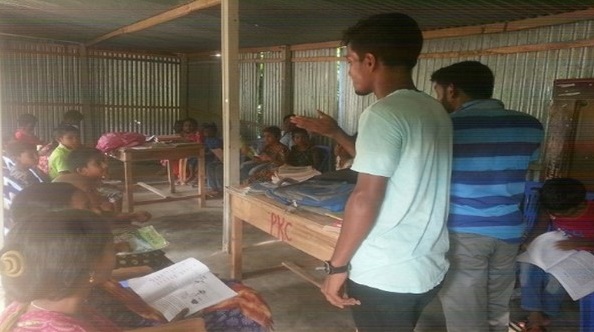 The Padma Parer Patshahla is now very popular among the guardians and people in the char area. They appreciate the initiative of the youth to spread the light of education to all poor and deprived children. The youth has shown that if they have will to do something for the society they can.