Fatema Parveen. She is poor but meritorious student. Her parents lead their life collecting resources from the Sunderban. They are known as ‘Bonojibi’ to others. Fatema has a strong will to continue study and be enlightened with knowledge and wisdom. But the poverty of her parents has hindered her advance to be educated. Her study almost got stopped due to her father could not afford to buy her textbooks. Being shocked and sad Fatema once attempted suicide because her father could not buy her books so that she could continue her study. But she was rescued from her attempt to suicide as she was immediately admitted to hospital. After being admitted to hospital she came in close touch of journalists, social workers, youths and representatives of development organizations such as BARCIK. This group of people encouraged her and promised to help her continue study. Thus being assured by those people Fatema started to dream once again and after getting release from the hospital she continue her study with double effort leading her to do well in the secondary school certificate (SSC) exams held in 2017. What led Fatema to attempt suicide? 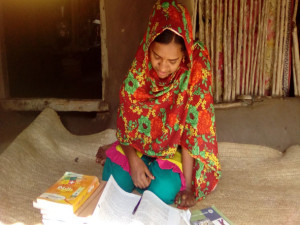 Fatema comes from a poor family having family members of 7 comprise parents, 5 sisters and one brother. Her three elder sisters got married at an early age due to their poverty. Fatema is a good student. She studied up to class 7 reading the books of her neighbor friends and classmates when they spend leisure times. Government provides textbooks for the primary level students but when a student gets admitted to high schools he/she needs to buy text books. However, Fatema did not face any problems until she reaches in class 8 as she manages to read the textbooks of her friends and does well in the exam.

But one day, she learnt that her neighbor friend, with whom she shares reading books, is leaving the village. The leaving of her friend will cause her problem as she will not be able to get her book for preparing and learning lessons for class and exams. She started to get frustrated thinking that when she attends class her teachers will scold her when she will not be able to prepare the lessons properly. She tried to think about the alternative and she came to know that one of her friends has been dropped out from education due to early marriage. Since the early marriage victim friend of her will not continue study that is why Fatema thought of buying her books as they are in the same class. Only BDT 700 would allow Fatema to continue study! She told her mom about the books and her mom straight answer to her “Stop thinking about study. We do not have much money to be able to buy those books for you.” 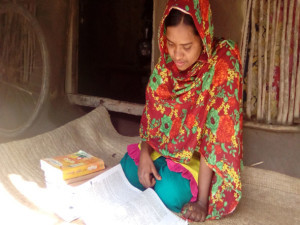 Hearing this from her mom Fatema became very frustrated and shocked. She has tried with all her possible means to manage books but the poverty of her parents has hindered all the possibilities. Thus being very frustrated she tried to kill herself consuming poison. She was then immediately admitted to hospital and got cured. During her stay in the hospital the youth and BARCIK bought her one set of class eights textbook and other education materials which led her continue her study. The youth and BARCIK also took the responsibility to manage the education cost of Fatema that enable her to appear for the SSC Exams this year with good result.

Fatema Parveen expressed her gratitude to the youth and BARCIK for their contribution and encouragement in her life. She said, “When I get frustrated and even committed suicide due being poor and due to not being able to continue my study it was BARCIK and the youth who came close to me, stand beside me and extended helping hands to me so that I could continue my study. I am really grateful to them. I am grateful to the Journalists and other people as well.”

Fatema got A-grade in the SSC exams. She wants to be a doctor in the future and asks all to pray her so that she could make her dream into reality and serve the humankind