Little steps can reach humans to the desired destination. Education is a vital course in this matter. In the traditional education system of our country, not everyone could get the chance to be educated till this day. Without education our real progress and development as a nation is impossible. That’s why to educate the marginal people, a group of young people including Shobjul islam, Alamgir hossain and Uttam Sutradhar has taken a step in Tanor upozilla, of Rajshahi. They said, ‘’to build our dream village and country we took these initiatives by discussing it among ourselves. We are fulfilling our responsibilities and by continuous effort we made our village free from illiteracy”. They also said, ‘‘we did not wait for any workshop or project. In this case, BARCIK played a role to help us getting the strength and courage. We did it, we will continue doing it, we will only go forward’’. 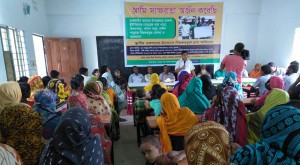 If necessary, go to the Far East China for education says a proverb. Though they did not need to go to China, they definitely surprised everyone at Mohor village of Rajshashi. In 2014 the youth of Mohor celebrated the International literacy day along with the local teachers and villagers of all age. On the ceremony they didn’t just celebrate the day by discussing and rallying, they had a vision to make their village free from illiteracy. They planned to do it all by themselves. As planned, they went to every area and made a list of people who couldn’t read or write. To do that, they faced some problems. Most of the elderly ones were too shy to admit their illiteracy. But it couldn’t stop them. They went to various government offices, school and the UP (Union Parisod) to find out who are the ones who sign with their thumb. Eventually they made communications with those villagers and were able to make them understand that illiteracy is a curse and it’s a shame to use the thumb to sign. After encouraging them in various ways they started to teach the elderly villagers.

On the other hand, their time was occupied in jobs and other works, so they continued this operation to prevent literacy at evening and night and any spare time available. Practical numerical lessons about their life and environment were curved out which no text books contained. They learned the lessons of adding and deducting the visible and invisible of their surroundings. It became the school of life. Where to go for which services and to claim rights everything was included in the curriculum. 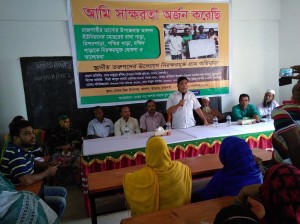 At one point during the lesson the learners realize that they have to read books and learn the tricks of the books. Then the young educators contacted with then, the Tanor upozilla executive officer Md. Muniruzzaman Bhuiya and the Upozilla education officer. They also let the UNO hear about their initiative and the problems along with it. UNO told them to write an application to the District Commissioner of Rajshahi and helped with the application. The DC immediately ordered the district deputy director formal to provide the books for the people who informally study under the coaching of the youth. The deputy director formal initiated to get the books off the storehouse and gave it to our young friends. They went to their village with these books without any delay and the learners were even more thrilled. Of the village Mohor, Bagha para, Dokkhin para, Poshchim para, Mission para these four areas were completely free from illiteracy. At last on September 7th the Tanor education officer Badiuzzaman announced these four areas “illiteracy free”. At the same time inspired by the young dreamers of Mohor the youngster of Gokul – Mathura, Tanor started working on making their village free from the curse of illiteracy.

The young people said, “We have been successful to free four areas of our village from illiteracy. We believe nothing is impossible in this world. We didn’t just educate the elderly but helped the drop out students get back to the school. There is not one person in this area will be found now who would use their thumb to sign with fingerprints.”