“We, the women, face hundreds of problems in our day to day life. We have to take care of our kids, oversee the household works and rear livestock. There are many problems that we undergo where fresh water related problems during the rainy season and winter due to the drought are acute. It seems hardship never leaves our company.” The above statement belongs to Bilkish Ara, president of Bilenapalpara women’s organization of Poba sub-district in Rajshahi. She went on saying, “There are many new ponds excavated in the wetland in an unplanned way which distract the natural flow of water creating avenue for water logged situation. The stagnant water even overflows our houses making difficulty in maintaining daily household works. But we do not stay idly. We work in an integrated way to get our problem solved. With the aim to remove water logging in our house we have bought pipes to channel the stagnant water into rivers so that we could free our houses from water logged problems.” 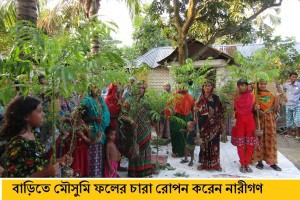 The Bilnepara village under Darshanpara union is surrounded by Juwakhali River in one side and Beel (Wetland) in its all sides. These Beels were sources of fuels for women and sources of different sorts of works for men in the past. But due to manmade intervention, particularly unplanned excavation of artificial ponds, the natural diversity of these natural settings (Beels) has disappeared nowadays.  The unplanned intervention has resulted in water logged situation in the village creating problems for people and other living subjects. According to the statements of the villagers, due to the unplanned pond excavation, local plants and herbs are almost extinct in the village and even local species of trees and crops are hardly found in the village today. The resulted consequence has also worsened the health situation of the inhabitants making them susceptible to different new and old diseases.  On the other hand, frequent use of chemicals has intensified the problems to some extent. The women thus during winter season have to cross a long distance to fetch water for drinking and household use due to the resulted drought situation. 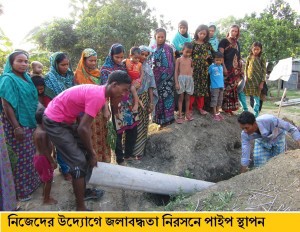 However, the women at Bilnepara village are brave enough as they do not stay idly seeing problems around them. They rather think and plan how they themselves could contribute to ease the problems. As the basis of their thinking, they formed an organization which they named Bilnepara women’s organization with the objective to get united and sort out all the problems together. Bilkis Ara thus said, “Every day we think and discuss about the problems and make way to sort them out by ourselves. We nourish and collect uncultivated food plants in the nature to solve our vegetable demand during the crisis and disasters and try to plants those naturally grown food plants in our lands and homestead.” She went on saying, “We conserve and plant these plants as we want the new generation to know and recognize these important and nutritious food plants available in our surroundings.”

Every member of this organization planted a fruit tree each in their homestead during this rainy season. According to them, these trees will contribute in ensuring environmental sustainability as well as serve fruits to all. These women do not only confine their good works in planting trees and farming vegetable or conserving uncultivated food plants but also made communication with the Union Parisod and concern government departments to get the water logged problem solved. However, they neither get contented making communication with concern Union Parisod or keep waiting for its immediate response rather in order to get the problems solved they bought three pipes with their own fund to remove and channel the stagnant water so that their houses are not over flooded with water during the rainy season.

On the other hand, they had meeting with the UP chairman and members to persuade them (UP members and chairman) not allowing anyone excavate ponds in an unplanned way in the existing wetlands. With the objective to produce crops even in the water logged situation, both men and women farmers in the village search water tolerant crop varieties and they experimentally farm those varieties in their lands. They want to make their village a happy one and that is why the 35 women of the organization along with the help from the male members in the village stay strong and united during their wounds and woes. They believe that united they stand and this unity will enable them to withstand any sort of human and natural disasters.