The Padma river flows above Harirampur upazila. Due to river erosion every year, many arable lands get disappeared into the river. On the other hand, due the change in the water flow of the river sometimes small new lands get emerged helping farmers to see ray of hopes. They get relief breath back. If those new emerged small lands sustained for 1 or 2 years, then gradually the lands get fertile. Thus farmers, understanding the position of soil, select varieties of crops.

However, about 700 acres of land emerged at Bahirchar, Dariqandi, Algirchar, Boyra Union, Khalpara Bara, Karmarkarkandi, Charakandi and Harukandi areas of Ramakrishpur Union in Horirampur. farmers farm different crops such as boro, nuts, sesame and kaun. In particular, most of the farers are seen to cultivate peanuts in those sandy lands. Talking to some farmers of Karmarkarkandi farmers, they said, “After eight years, the land which was lost in the Padma river has awakened. We can now cultivate almonds, sesame seeds, boro rice in the Baloo Char, which is now awakened by the peasants of the river. 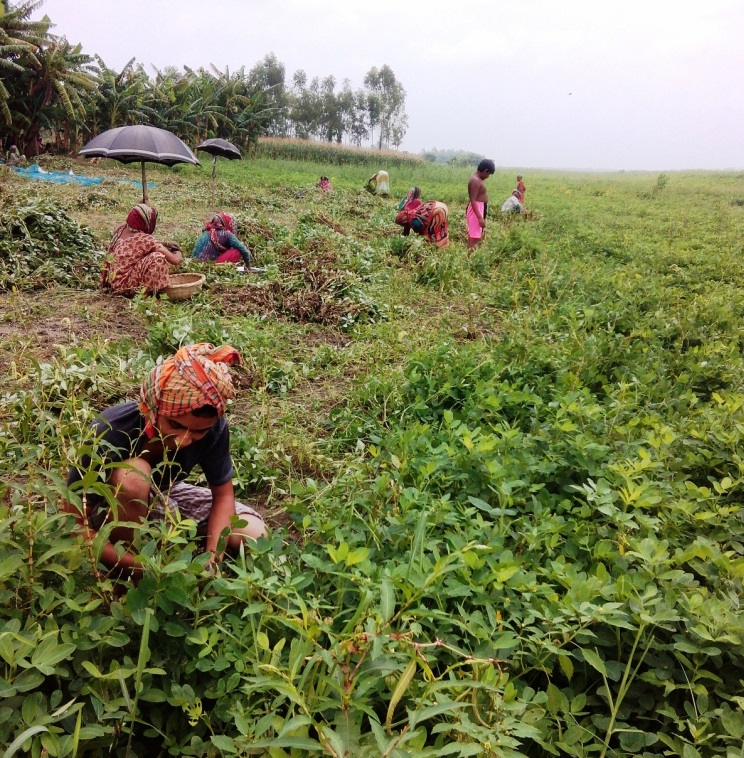 Farmers are cultivating almonds in about 700 acres of land from the Ramkrutur Union of Harirampur upazila on the bank of the river Harukandi Dhursura Union. Farmers farm peanuts in the first week of Falgun and harvest the peanuts are in first week of Jaistha month. farmers are very happy as they can take the nuts before the floods arrive. peanut cultivation is helpful to combat Natural disaster. In this context, farmer of Kandi village Arseed Ali (45) said, “I have cultivated almond in 3 bighas of land. It cost me around 15 thousand taka. I hope I can sell 30 thousand taka of nuts. “

It has been seen that both women and men are collecting nuts together. Farmer and land owner Arseed Ali said, “Those who are collecting nuts in my land, are not laborers. They are not laborers but take peanuts with them in exchange of their labor. “The women who collected peanuts in the field get some nuts that amounted to 6/7 kg, whose market value is 400-450 taka.”  When the news of the harvesting of nut spread, neighboring relatives of neighboring villages came together to harvest nuts. They together work and share a good relationships. Ayesha Begum a, female farmer said, “My two boys and girls go to school. They used to take Jhalmuri, chips, baravajas, rituals, cheettes as their snacks. This cost me Tk 10-15 every day. But if I have a nuts in the house then I fry the nuts and give them to eat as their snacks. As a result, they do not eat food purchased outside. That is why I collected the grains of other land.”