When Abdul Mattaleb (42) ventured into vermicomposting in 2012, nobody imagined that this small initiative would change his life one day.

Hard work and a good guidance can make all the differences in life, the case of Abdul Mattaleb, a farmer from Valuatoli village of Nazirpur union of Kolmakanda upazila under Netrakona district has proved it. Until nearly five years ago, the smallholder often worked as a labourer to earn his bred. On his 25 decimals of land, he grew some paddy and vegetables round the year and a little wheat during Rabi (October to March) season. But his income was too low to meet his daily needs. 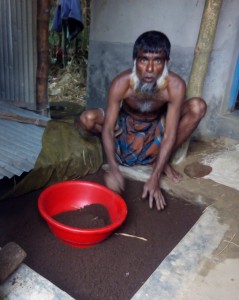 He didn’t own any livestock and was completely dependent on chemical fertilizers and pesticides for farming, which slowly became unaffordable for him due to rising prices. Practicing mono-cropping and the continuous usage of chemical fertilizers and pesticides adversely affected his land’s soil, causing low productivity. Living from hand to mouth, he almost planned to migrate to town for searching bred.

Mattaleb’s life began to change in 2012 after he attended a programme organized by BARCIK held in his village, where he learned about integrated farming system and several techniques such as intercropping, seed conservation, as well as preparations of bio-pesticides and vermicomposting.

He found the idea of preparing organic manure quite appealing. But he was initially apprehensive as he didn’t know how to start it, since he didn’t own any cattle. Clarifying his doubts, BARCIK’s staff informed him about the ways to do vermicomposting, for example by collecting cow dung which were found in scattered forms across the village.

And this is exactly what Mattaleb did. Every morning he collected cow droppings that fell on the streets or in open spaces and gathered in the courtyard. With the support from BARCIK, he got a vermi bed installed, a base required to put the waste for the preparation of manure. “Once I started manufacturing vermicompost, I never looked back,” he said. Mattaleb collects cow dung for organic manure.

Mattaleb now has four vermi beds and is able to produce and sell two to three quintals of organic fertilizer per month. In five years he has become an expert in vermicomposting. He has even begun to supply compost worms to at least 125 members of his village farmers’ organization and has also trained them on preparing organic manure.

Through the knowledge sharing exchange visits, he received different techniques of sustainable integrated farming, Mattaleb now practices mixed cropping of papaya, brinjal, red amaranth in rabi season and ladies finger and cucurbits in kharif season. He also has a kitchen garden that ensures supply of vegetables around the year. “Life has truly changed for us,” said Mattaleb smilingly. “Till few years back, we couldn’t make enough to even feed our children but these days we are successfully managing our field, cultivating a flourishing kitchen garden and have learnt superior techniques of growing food. Also, making compost has proved to be a real boon.” By successfully adopting integrated farming, Mattaleb’s dependence on market for farm inputs has reduced. He is capable to prepare 16 types of bio-pesticides using plant extracts and local biodegradable ingredients. He doesn’t use chemical fertilizers and pesticides anymore and this has helped him reducing the cost of cultivation and improved his farm’s soil health. His production has increased by nearly 40 per cent and so is his income. 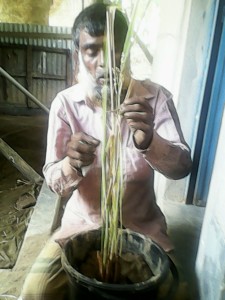 Last year he received training on plant nursery establishment and produced papaya seedlings those are bought by neighbors from his house. He also distributed some native varieties of saplings to the people who love native species to plant in villages. Moreover, he was often called upon by other local NGO’s to conduct hands-on training sessions on vermicomposting for their beneficiaries. He earned a total of 13,500 taka by selling earth worm. This year Mottallb has started rice breeding through hybridization to get disease resistant rice variety. Mottaleb recently established a small seed bank to make available of indigenous seeds at his house by converting a residential room.

On an average Mottaleb has been earning monthly 3000-3500 taka by selling vermin compost and earthworms that made him quite capable to bear the educational expanse for his two school going children who are studying at primary and secondary levels. He hopes to educate them further. He has recently installed a sanitary latrine and an 85-watt solar system on the roof of his house, which powers four bulbs, one television and also recharges mobile phone.

Mottaleb, a marginal poor has set an example in his village and earned respect for his hard work. He has been inviting in different programs arranged by Department of Agricultural Extension, Department of youth and social welfare and local development NGO’s to share his Endeavour. So far he stopped five child marriages in his village. “Though I don’t have sufficient land and resources but I influenced others. I am happy with my dignified life,” said a proud Mottaleb.