The increasing use of chemical fertilizers and pesticides in the field of agriculture has created an adverse circumstance for the climate and soil. According to Mr. Zakir Hossain, a local farmer, in Rajshahi, the constantly changing weather is causing increasing problems for them to cultivate new crops in the field. As per his accounts, the local varieties of crops that used to be cultivated are quite adaptable to the new soil condition. However, with lack of proper conservation and decreasing cultivation, all these local varieties are now being pushed towards extinction. He claims that due to the government’s inactivity in conserving the previous varieties of local crops that suit the local climate and soil as well as the introduction of hybrid and high yielding varieties in agriculture, new kinds of agricultural diseases and pests have emerged causing increase problems. Besides, the use of chemicals fertilizers and pesticides has resulted in adverse climate changes. 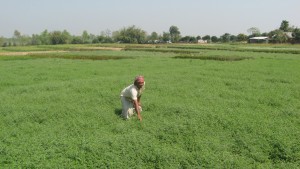 This drastic change to the fertile lands are causing drastic changes and damaging the crops Farmers said that the increase in temperature has caused an increase in the introduction of pests in the fields. Increasing usage of pesticides and chemicals in the field has caused to lower the adaptability of crops to the adverse weather conditions. On the other hand, it has seen that local crops varieties cultivated naturally have stronger adaptability towards the changing weather conditions. According to farmers Md. Gajiyar Rahman and Yusuf Ali Molla, the extreme temperatures, added with high levels of humidity are the main cause of crop damage in the fields.

It is found that, even without the use of pesticides and chemicals in the fields, local varieties of crops can be cultivated quite well, since they have already grown used to the local weather and climate changes. People think that if farmers cultivate these local crops, it could decrease the damage done by the changes in the environment. 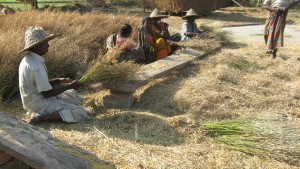 Betel leaf farmer, Md. Sumon Mian is an experienced farmer of the area, who claims that the low dosage of pesticides used in his fields resulted in the longer mortality of his crops. He says that other farmers have switched from rice to growing other crops due to damage inflicted by the climate, although this does not necessarily decrease the loss.

Observations show that, a decline in the amount of rainfall in the area has deterred the cultivation of the Aush crop in the fertile lands. Together with its dependency on rainfall and increasing market demand for corn, jute and vegetables, farmers have deviated away from growing the Aush in their fields. However, the state of market demand is always changing, resulting in losses for farmers in some days. Statistics show that, even though the capacity for Aush was estimated to 44,622 hectares, the actual cultivation was 40,269 hectares. Last year, aush cultivation in Rajshahi was 42,000 hectares.

The changing weather has shown its toll on the betel farmers as well. They claim that their fields are under attack of pests and insects. Furthermore, betel grows best in the waters of rivers and lakes. Since, these water bodies are now being used to meet fish demands, the water has become too polluted and dirty for betel production. A decrease in the number of birds that used to feed on these pests along with the high temperatures has made it extremely difficult for betel growth.

Thus, farmers are being affected in several ways due to climate changes. Using pesticides to help them getting rid of the problem has boomeranged on the farmers themselves as they struggle with the increasing pests and insects among their crops. They think that they should be more focused in inventing new varieties of crops that are more sustainable and durable in extreme weather changes. However, some farmers have been highly successful in just cultivating the local crops. But, in order to increase mass production, this must have the full support of the government.