By Fazlul Haque from Satkhira

The rampant damage in the Southern-western part of Bangladesh hit by super cyclone is still visible today. The protection dams (Beribadh) of Shymanagar, sub-district of Satkhira are the most devastated infrastructures during the cyclone. The dams have been damaged allowing salt water to enter into the houses and sweet water sources of the inhabitants in this area. As result of this saline water intrusion, the inhabitants of Shymnagar face immense crisis of drinking water today. There is water everywhere though but this is saline water! The inhabitants of the coastal area mentioned that the super cyclone Ampan has damaged almost all protection dams of Gabura, Padmapukur, Kashimari, Burigoalini unions of Shymanagar. Erosion of Datinakhali and Durgabati areas of the protection dams has resulted in the flooded of 9 villages of the area. 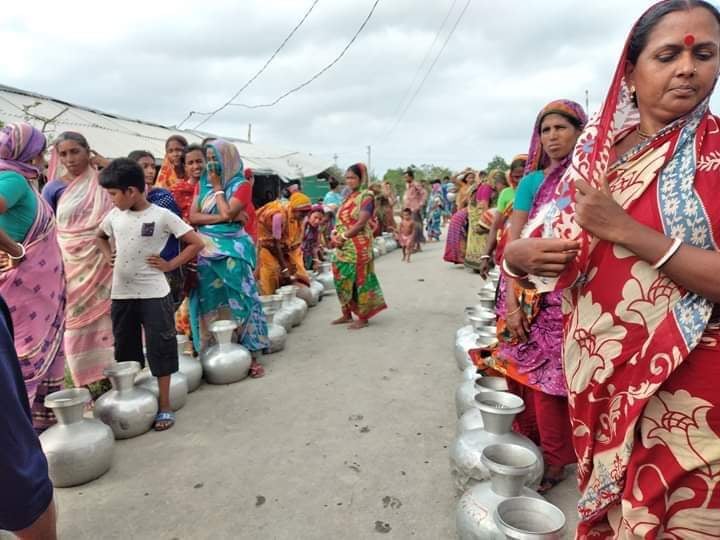 Due to the damage of the protection dams about 4 thousands of houses of the areas have gone under flood water leaving no rooms for people to live and lead their life and livelihoods. The most burning problem that these people face is scarcity of drinking water as the sources of sweet water has been damaged by the cyclone. The same scene has been seen in the whole coastal area of Bangladesh. However in order to ease the scarcity of drinking water of the people in coastal area BARCIK including other non-governmental organizations and youth associations provide water purification tablets and other forms of emergency assistance. The organizations also took initiatives to fetch drinking water from a long distance using vans and other locally available transports to distribute among those affected people. BARCIK so far has provided more than 20 thousands liters of fresh water to the affected people in the coastal areas.

However, these assistances and helps from the NGOs and other associations are not enough to meet the demand of the affected people. Shefali Begum, a leader of women organization thus said, ‘There is water everywhere but we cannot use this saline water. There is no source of fresh drinking water in our area today due to being hit by super cyclone. There have been initiatives from NGOs, like BARCIK, youth associations as well as government to solve the crisis of drinking water but it is not enough.’ On the other hand, Siddiqur Rahman president of IFM farmer organization said, ‘Saline water has entered into our ponds contaminating the fresh water due to the damage of the protection dams. Today we face the immense crisis of fresh drinking water. We do not get water to bath, to use in households and to drink. Besides, the physical communication system has broken leading us not be able to fetch water from other areas.’