For the longest time, irrigated HYV rice has been Abdul Hamid’s primary source ofincome like many others. But last four years, he planted only half the amount that he did in the previous years. The HYV of rice is extremely water consuming to grow. Hamid a father of three daughters often worked in the in rice field from 8 a.m. until 2 a.m. during harvest time experiencing extreme water crisis and had to purchase with high price but received minimal return at the end.

Hamid lives in the high Barind Tract that has a distinctive physiographic feature comprising series of uplifted blocks of terraced land covering 8,720 km² in northwestern Bangladesh. In the area, average rainfall is comparatively low with irregular distribution and temperature in the monsoon season is very high. The area is semiarid and drought-prone, low fertile, red colored harsh and hard soil. Introduction of so called green revolution in mid sixties, farmers here started cultivating chemical dependent HYV irrigated rice in great extent by increased irrigation facilities through using underground water in deep tube wells. In four decades, excessive use of ground water for HYV rice irrigation, ground water level has dropped up to 120-150 feet from the surface that created manifold problems in farming, biodiversity and livelihood. Many deep tube wells now collapsed and the situation further so deteriorated that even drinking water becomes scarce in certain villages of the region. Like many others farmers, Hamid also affected and since 5 years back he started different initiatives to cope with the natural disasters. 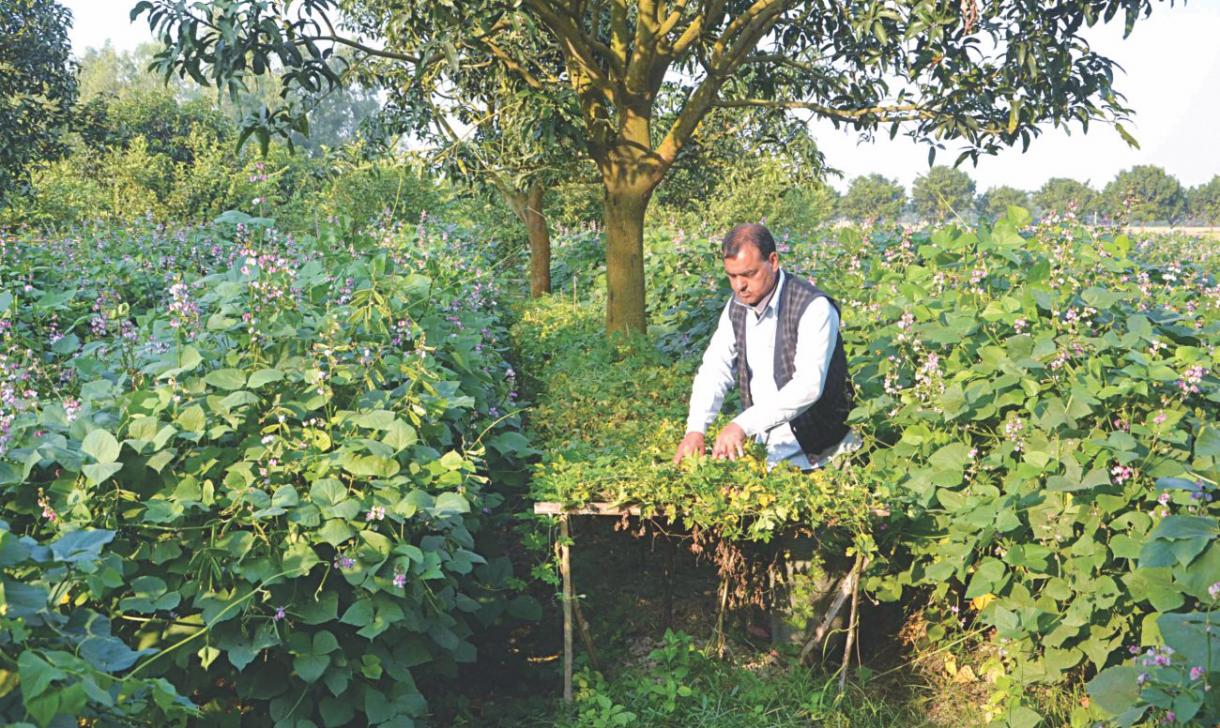 When Abdul Hamid ventured into vermicomposting in 2014, nobody imagined that this small initiative would change his life and change the drought affected community one day. Hard work and a good guidance can make all the difference in life, as in the case of Abdul Hamid, a marginal farmer from Bohora village of Kolma union of Tanore upazila under Rajshahi district. Until nearly five years ago, the smallholder only relies on rice farming for a living. On his one hectare of land, he grew only rice round the year and a little wheat during Rabi (October to March) season. But his income was so low that he could hardly make ends meet. He didn’t own any livestock and was completely dependent on chemical fertilizers and pesticides for farming, which slowly became unaffordable for him due to rising prices. Practicing mono-cropping and the continuous usage of chemical fertilizers and pesticides adversely affected his land’s soil, causing low productivity. Living from hand to mouth, he almost planned to leave farming forever!

Hamid’s life began to change in 2012 after he attended a programme organized by BARCIK held at his village, where he learned about integrated farming system and several techniques such as intercropping, seed conservation, as well as preparations of bio-pesticides and vermicomposting that could increase soil fertility. He found the idea of preparing organic manure quite appealing. But he was initially apprehensive as he didn’t know how to start it, since he didn’t own any cattle.  Clarifying his doubts, BARCIK’s staff informed him about the ways to do vermicomposting, for example by collecting cow dung scattered across the village. And this is exactly what Hamid did. 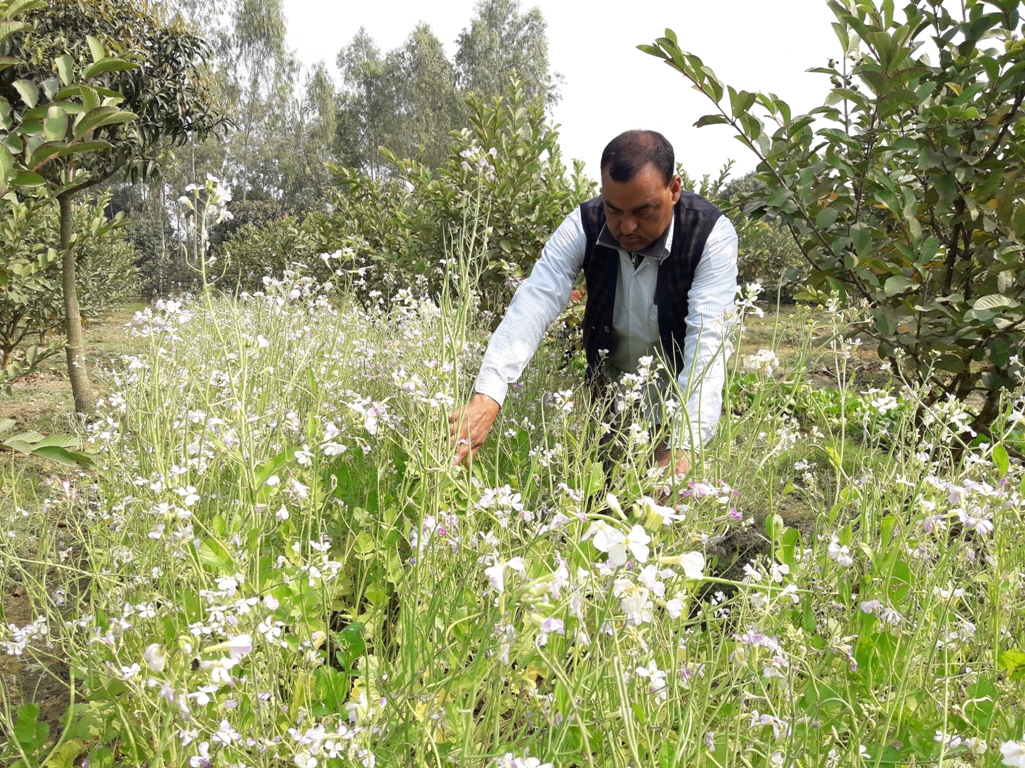 Every morning he collected cow droppings that fell on the streets or in open spaces and gathered in the courtyard. With the support from BARCIK, he got a vermi bed installed, a base required to put the waste for the preparation of manure. “Once I started manufacturing vermicompost, I never looked back,” he said. Hamid now collects and purchases cow dung for organic manure. He now has 24 vermi beds and is able to produce and sell eight to nine hundred kgs of vermicompost per month. In five years he has become an expert in vermicomposting. He has even begun to supply compost worms about 1,50,000 to at least 350 farmers of 15 villages and has also trained them on preparing organic manure.

Through the knowledge sharing exchange visits arranged by BARCIK, he received different techniques of sustainable integrated farming, Hamid now practices mixed cropping of papaya, bean, brinjal, red amaranth, spices in rabi season and ladies finger and cucurbits in kharif season. He also has a kitchen garden that ensures supply of vegetables around the year. “Life has truly changed for us,” said Hamid smilingly. “Till a few years back, it was hard to arrange meal for thrice a day but these days we are successfully managing our field, cultivating a flourishing kitchen garden and have learnt superior techniques of growing food. Also, making vermicompost has proved to be a real boon.” By successfully adopting integrated farming, Hamid’s dependence on market for farm inputs has reduced. He is capable to prepare bio-pesticides using plant extracts and local biodegradable ingredients. He doesn’t use of chemical fertilizers and pesticides anymore and this has helped him reducing the cost of cultivation and improved his farm’s soil health. Last year he received training on plant nursery establishment and produced papaya seedlings those are bought by neighbors from his house. He also distributed some native varieties of saplings to the people who love native species to plant in villages. Moreover, he was often called upon by other local NGO’s to conduct hands-on training sessions on vermicomposting for their beneficiaries.

On an average Hamid has been earning monthly BDT 12000 to 13000 (140 to 152 Us Dollars) taka by selling vermin compost and earthworms that made him quite capable to bear his family expense. He has recently refurbished his house and installed a sanitary latrine and a 100-watt solar system on the roof of his house, which powers four bulbs, one television and also recharges mobile phone. 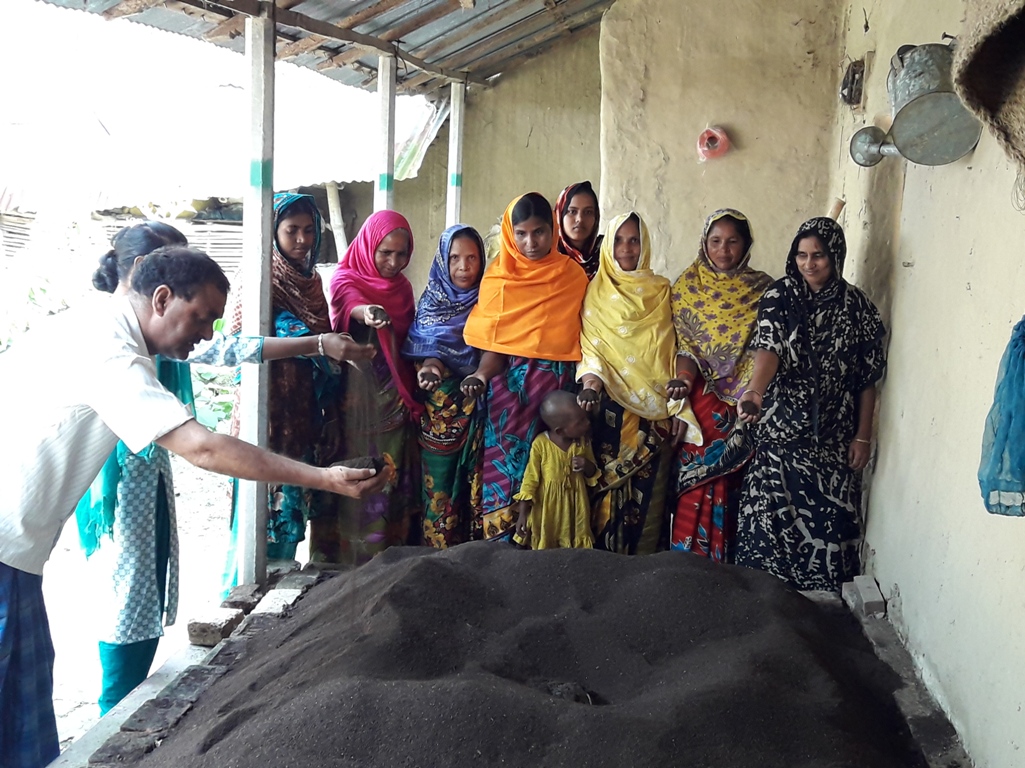 Hamid a marginal poor has set an example in his village and earned respect for his hard work. He has been inviting in different programs arranged by Department of Agricultural Extension, Department of youth and Social Welfare and local development to share his endeavor. He take part in several agricultural fair to promote vermicompost. So far, he stopped five child marriages in his village. “Though I don’t have sufficient land and resources but I influenced others. I am happy with my dignified life,” said a proud Hamid.

Hamid’s initiative has turned barren into fertile and greener. Villagers come forward in practicing mix cropping in lieu of HYV rice cultivation that helps to retain ground water level. Hamid has been able to change the outlook of farmers on farming and made it possible that drought stricken low fertile land could be cultivable by following agro-ecology.