(This feature was published in the daily Somokal (Suridh Somabesh page) national daily of Bangladesh on 13 October, 2014 and Silvanus Lamin translates it for our readers with little modification from the original text in Bengali ) 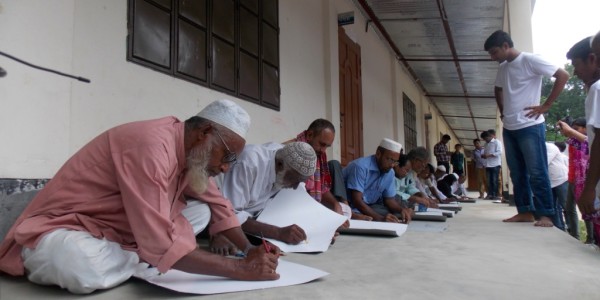 Mogra River is full of water. In the house, a daughter is matured for getting married! Thus a date for the marriage has been set up as proposal came from the bridegroom. Today is the wedding day! However, as anticipated, the yard of the house is crowded with presence of the villagers to cheer up and witness the very ancient practice of family bondage. The new couple is given warm reception adopting local rituals and norms. Music starts and everyone is in merriness mode: some sing, dance while others play various rural games. The fishermen hunt fishes in the river since the early morning and the newly husband buys fresh fishes to entertain the people in his in-laws’ side. All on the sudden a big noise is heard from the other side of Mogra River! What is happening there? Going close to the site, I discover, a swimming competition takes place between the relatives of the two parties who have come to attend in the wedding ceremony.

The above episode that centered round the Mogra River was a symbolic display of rural life which has an intricate relationship and firm connectivity with Rivers. The above ‘day of life’ was festooned in the Mogra River festival with the slogan ‘Our life, our future; the Mogra River’ being arranged by BARCIK and Somoka Sudridh Somabesh. The overall event seems to be a crowded ‘get together’ of humans in the area as people regardless of age, sex, class, race and occupations enjoyed the event and express solidarity with the organizers that was held on 28 September, 2014 in Netrokuna!

Among the activities that carried out to celebrate the Mogra River festival includes: Discussion, drawing competition of the aged people, paying tribute to the rivers, reflection, display of various goods and crops produced using the water of Mogra River and cultural function. All the ‘say’ of the people who come to observe the event clearly suggests protecting the Mogra and other rivers of Bangladesh for our own sake of living and surviving! They urged and appealed to the concern authority to stop building infrastructure on water bodies and dismissed all the built infrastructure on and illegal encroachment of water bodies to ensure that Rivers are safe and have all their natural flow. Thus with the objective to retake people to their early life, the organizers arranged the event in such a way that it touched all the hearts reminding them of their enriched and fruitful life related with and connected to Rivers. The Mogra River once was very strong and full of flow with strong tide but today it has turned to a small canal during the winter season due to lack of initiative to protect it from dying and due to the illegal encroachment that encompasses building of infrastructure on its bank!

Mogra is my Mother

After the eventful and heart touching pre-inaugural ceremony of Mogra River festival, Upazilla Parisad Chairman Jahidul Islam Sujon inaugurated the event. Environment activist Prodip Nayek, Vairab Shaini from India, Ferdowsi Akter Rita of BARCIK, Suridh district committee’s president professor Tapon Kumar Saha, UP member Abdul Hamid including others delivered speech in the discussion session moderated by Ohidur Rahman and Md. Alamgir BARCIK staff in Netrokuna. The discussants asked all to take initiative reviving the almost dying Mogra River. They stated that rivers are part and parcel of humans’ life. Human has intricate relationship with the rivers in every sphere of their life. But all become nostalgic and become emotional when UP member Abdul Hamid said, “Mogra River is my mother. Everyone is trying to kill my mother today. Without a mother a son/daughter cannot live and in the same time without the Mogra River we cannot live here.” I was spelled bounded hearing his words and become very emotional.

An amazing evening on the bank of Mogra

Nobody has anticipated that they could have witnessed such an amazing evening on the bank of Mogra River that day! Just think, how could older people (most of them beyond 60 years old) sit for a drawing competition in such a stage of life having no academic training and learning about drawing? Yes, this was happened that evening. About 50 aged people most of whom are fishermen, boatmen, farmers, actors of local theater, housewives participated in the drawing competition where they draw and depict the scenery, the face, the water, the fishes, the real shape of the river during winter and rainy season. While depicting and drawing the things they saw in Mogra River during their childhood, these people were swallowed by emotion and joy. They for just that moment went back to their early life and found the endless happiness in their heart. The visitors, the participants, the organizers-all young and aged witnessed the amazing evening and they too being shaped with surprise happiness and joy.

Oath to protect the rivers

In the second session of the day, district commissioner of Netrokuna Torun Kanti Shikder attended as chief guest of the event. The Indigenous people issues’ researcher Ahmed Khan Aiyub and Alpona Begum presented the keynote paper of the session. With the moderation of Mayor of Netrokuna municipal Prashanto Kumar Roy and Pavel Partha, coordinator of BARCIK, discussants of the session include: educationist professor Motindra Sorker, Folk researcher Gulam Ershadur Rahman, principle Anowar Hasan, Prodip Nayek, Vairba Shaini, DD Luftur Rahman, additional Police Super Abdul Momen, Isabel Zensen, Emma Lief and some others. The discussants in their discussion depicted the reasons behind the Mogra River becoming a dying one and focused on activities to be implemented to protect it from dying. They made an oath to protect the river and offer the inhabitants of Netrokuna a pollution free Mogra River in near future.

A festive mode was everywhere during the Mogra River festival. River fair took place in the venue of the festival. I saw rice, paddy, cash crops farmed using the water of Mogra, fishes, materials of hunting and catching fishes, muddy products made from the mud of Mogra River bank and some pictures of the River. But my eyes were fixed at a stall where I saw water in plastic bottle being collected from 22 points of Mogra River in different places. The people who oversee the stall mentioned that they collected this water from 22 different places in 22 points of the River to display in the fair for the visitors! Their initiative really touched me much. They also distributed leaflet to the visitors with messages to protect their beloved Mogra River.

Mogra River declaration was formulated based on the opinions and recommendations of the people of all stakes where folk singers, cultural activists and poets participated who had developed various words, phrases, songs and poetries based on river life and culture. Their participation has strengthened the formulated declaration. Both young and aged people then memorized their memories about Mogra River including making recommendations to protect the river from dying. While memorizing memories the people also expressed their gratitude to the Rivers for its contribution in their life and livelihood. While memorizing Jatra actor Syed Ahmed Khan said, “We moved from one village to another on boat using water path of the River. But today, boat are not sailed in this river due to this river has lost its depth and water.” He went on saying, “During rainy season though there is water in the river but we cannot sail boat as the brides were constructed in such a way that water only can pass over; not boats.” Fisherman Jugesh Chandra said, “Our life and livelihood centered round this river. So our gratitude towards the river is endless. But I feel pain deep inside to say that there is no fish in this river today.” However, boatman Beerbal, Nazneen Akter and some other shared their memories with the Mogra River.

Though in the organizing list the name of BARCIK and Somokal Suridh Somabesh is clearly enlisted yet this festival belongs to all; this festival belongs to the inhabitants of Netrokuna district. When the festival started one could hardly imagine that people of all classes, sex, occupation and races will participate. But when time went on number of participants increased. Thus about 36 social and cultural organizations and 22 educational institutions expressed solidarity with the event and treated the event as their own one! Farmers, fishermen, potters, boatmen, Jatra actors, researchers, journalists, NGOs activists, environmentalists, teachers, students, women, writers, poets and everyone are in the list of participants. These people treated the event as their own activities leading the success implementation of festival. Actually we hardly find any class of people who do not participate and express solidarity with the Mogra River festival! Thus Isabela who comes from Sweden were overwhelmed seeing the number of people participating in an event to protect a single river of Bangladesh! She said, “It is beyond my idea and imagination that any event could take place to protect a river where thousands of people of different age, classes, occupations, sex could participate”! At last I can only say that the event does not confine to BARCIK and Somokal Suridh Somabesh’s one; it becomes the event of all and this leads the successful implementation of the event.