“Our daughter is growing up, given the situation of the society we wanted to get her married. We are poor people; if we could get her married we would be relieved”. Recently being scared of eve teasing as a measure of safety Abdus Salam from Boddipur colony, Shatkhira wanted to arrange a marriage for her premature daughter. Because of the active interference of local government and non government organizations the ninth grader girl is now safe from child marriage; but the risk of early marriage has increased because of eve teasing. At the same time, it is accelerating poverty. Because of early marriage the physical, mental and intellectual growth of a girl child is being hampered. Premature pregnancy and child birth is increasing the risk of death. And the child of the premature mother is not being born healthy. Early marriage is increasing abuse, divorce and even polygamy. But, the words of hope are that government and non government organizations are initiating detailed programs to prevent early marriage. According to these programs, children are being given red cards. Through this red card the children in the risk of early marriage are being regularly overseen. Throughout schools and madrasa anti early marriage red card teams are being constructed. The red card initiative is only limited to the sadar upozilla. Apart from that in areas throughout the district bill boards to prevent early marriage has been placed. Everyone is being warred including teachers, guardians, religious priests. According to the information of Shatkhira Sadar Upozilla Parishad, in 2015 in Shatkhira Sadar Upozilla 58 among 322 schools were surveyed and in a year about 412 individuals were victimized by early marriage. 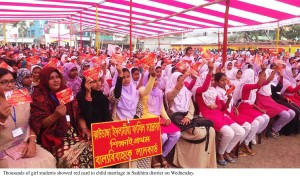 From January 2015 to October 2015, the administration conducted 55 mobile courts and stopped those marriages instantly but 53 of those individuals were a victim of early marriage later on. Only two of those girls were able to return to school. The UNO of Shatkhira Sadar Uozilla Monira Parveen told, ‘early marriage takes lives away from file. To prevent early marriage co operation is needed from everyone of the society. The administration is active. It is difficult to prevent early marriage if consciousness and liability is not created from family and society.” After sharing vivid field experience on the subject she said, “Once the arrangement is made for early marriage, it becomes almost impossible to prevent that. If an early marriage is reported then a mobile court is set up and the marriage is initially stopped; but usually they carry on with the marriage somewhere else. And the victim does not return to school”. On the other hand, she added “when a mobile court is set up during the ceremony the family feels harassed socially, psychologically and also suffers financially and the girl to be married becomes terrified and mentally devastated. That’s why to prevent early marriage it is needed to create a social movement. We need to build such a society where the guardians will develop the mentality to stay away from social disputes like early marriage and so on.” Then again, the beginning of the movement against early marriage can be developed since childhood– an officer from a private organization with on field experience Shariful Islam who works to prevent early marriage thinks so.  He said, “In the Sadar Upozilla from class 5 – 10 about 22 thousands 5 hundred and 19 girl child and their parents were given the ‘early marriage red card’. Other than that, in 178 educational institutes a childhood red card team has been developed. This team has 2 thousand 4 hundred and 92 members. Now if an early marriage is arranged, the red card team members are coming forward to prevent it by calling the helpline number. As a result the administration expects that they would be informed in higher rate and in time”. The general secretary of ‘Shatkhira zilla Mohila Parishad’ Jyotsna Dutta said, “Early marriage is a curse to the society. Because of eve teasing, poverty and other reasons people cannot be free of this curse. By preventing early marriage we have to ensure proper education and training for our children. As a result, they will become human resource for the country and they will be financially independent. To do this, it is needed to be socially aware as the administration plays their role.”